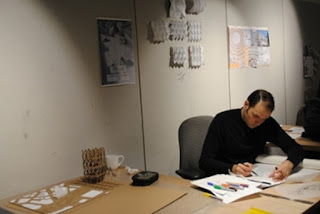 
The International Architecture Awards honors designs, built and unbuilt, that recognize architecture as a high art while answering complicated problems of environment, social context, quality of life, and sustainability. Fahed won the 2017 award for his design of a mosque. He received the 2016 accolade for his creative interpretation of a modern Italian piazza. The projects were completed following visits to Florence, Italy and Montreal, Canada as part of Architectural Studio III, a second-year graduate course.


The 2017 award is particularly meaningful to Fahed, who came to the University’s College of Engineering, Technology, and Architecture (CETA) in 2015 from politically-conflicted Gaza, a small territory located on the eastern coast of the Mediterranean Sea between Israel and Egypt. Leaving behind his wife, three young daughters, and an established architectural business, he felt compelled to explore the latest technologies in western design and fabrication in hopes of one day helping to rebuild Gaza’s fragile infrastructure.


“Gaza continues to confront unique architectural challenges because of the conflicts it has endured,” Fahed says. “Restoring the infrastructure of schools, mosques, and other landmarks will result in greater unification among people and improved economic opportunities. This award confirms I can be a vital contributor to such a goal.”


Fahed says he chose a tranquil design for the mosque project, which he titled ‘Transcendence of Light’. “I drew inspiration from the Muslim belief that emphasizes light as a mark of God’s presence. The openness of the mosque and the light leaning in invites all people to come in and learn about a peaceful, transparent, and welcoming faith while speaking to the architectural context of cities in the 21st century,” he explains.


The CETA MArch program is one of only two (Yale) in Connecticut that is nationally accredited by the National Architecture Accrediting Board (NAAB), a factor Fahed says gave him peace of mind in deciding to study at UHart. “I discovered most state registration boards require a degree from an NAAB-accredited program as a prerequisite for architectural licensure, which I plan to pursue,” he says.


Architecture Graduate Program Director Daniel Davis considers Fahed’s award-winning designs innovative and professional. “Fahed is capable well beyond his years and the architecture faculty is immensely proud of his accomplishments,” says Davis. “Not only has he brought international attention to our graduate program, but he is also a natural teacher, mentoring both our international and domestic students while he continues exploring diverse academic topics.”


Fahed has mentored students at Islamic University of Gaza, where he earned his undergraduate degree. He plans to pursue his doctorate in architecture so he can teach after he spends time “solving human problems. This is why I push the boundaries of design and building.”


He is motivated by the thought of reuniting with his family following the 2017 commencement ceremony. “They have the greater courage. They have given me a gift in allowing me to focus in-depth on my passion. These awards are for them and because of them.” 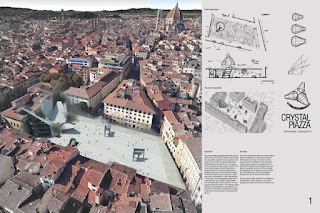 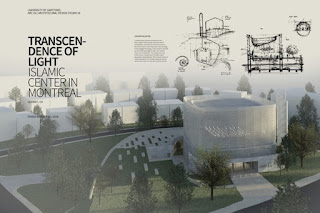 Design and sketch (unbuilt) of "Transcendence of Light" Islamic Center in Montreal, Canada.
Posted by CETABLOG at 7:49 AM