Nagurney Named A Fellow Of The Radio Club Of America Clubs & Organizations Submitted by David Isgur, University of Hartford, on 2012-11-01. 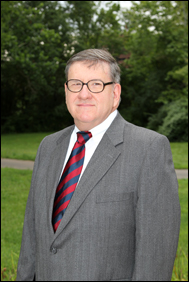 Ladimer S. Nagurney, associate professor of electrical, computer, and biomedical engineering and program director for Electrical and Computer Engineering in the College of Engineering, Technology, and Architecture at the University of Hartford, has been named a Fellow of the Radio Club of America. He will receive his award on Nov. 16 at the Club's 103rd Annual Awards Banquet at the New York Athletic Club.
,br> The Radio Club of America (RCA), the oldest association of professionals in the radio and wireless telecommunications industries, annually elevates worthy Club members to the grade of Fellow in recognition of outstanding achievement. Nagurney will be one of six RCA members elevated this to Fellow status this year, joining a select group of radio communications industry luminaries, such as Edwin Armstrong, David Sarnoff, Louis Hazeltine, John V. L. Hogan, Paul Godley and Allen B. DuMont.

The keynote speaker at the Radio Club of America's annual gathering will be David Sumner, CEO and Secretary of the American Radio Relay League (ARRL) which is based in Newington, ARRL is a national association representing thousands of amateur radio operators. From the 1979 World Administrative Radio Conference of the International Telecommunication Union in Geneva to his representation at the World Radio Communication Conferences in Istanbul and Geneva between 2000 and 2012, Sumner has been a steward of amateur radio throughout the world, applying his tireless energies on behalf of the World Radio Sport Team Championships. An RCA Fellow himself, he was awarded the Calcutta Key by the Radio Society of Great Britain in 1989.

Nagurney joined the Department of Electrical and Computer Engineering at the University of Hartford in September 1986. His research and teaching interests have been primarily in the areas of communications and signal processing. He has taught courses in analog and digital communications, RF systems, instrumentation, wireless communications and software defined radio.

As a NASA JOVE Fellow from 1992-1995, he collaborated with engineers at NASA Lewis (now Glenn) Research Center on the MiniTerminal Testbed low bandwidth experiment for the Advanced Communications Technology Spacecraft (ACTS). He has contributed to the development of grammar-based modeling for the development of Intellectual Property blocks for communications. He also has consulted on the use of RFID in dirty/wet environments.

In 1999, Nagurney was one of the co-principal investigators of a National Science Foundation funded project, Integrating Engineering Design with Humanities, Social Sciences, Science, and Mathematics. As part of this project he developed a course, Engineering Practice, which introduces engineering students to the design of large projects requiring multiple engineering disciplines and including societal impact. The project chosen for the first several years of the course was the siting and design of cell sites.

From 1995 to 1999, Nagurney was the consortium director of the NASA Connecticut Space Grant College Consortium, a NASA funded consortium. He also was a co-PI for the NSF Telecommunications and Network Engineering Technology Education Project, which linked high schools, community colleges, four-year colleges, and research institutions to train the next generation of engineers and technicians for the telecommunications industry.
During the 2008-2009 academic year, Nagurney visited the Engineering Research Center for the Collaborative Adaptive Sensing of the Atmosphere, CASA, an NSF Engineering Research Center at the University of Massachusetts Amherst, where he collaborated on the development of small integrated solid-state X-band radars for Extreme Weather prediction.
Nagurney received his BS from Lafayette College and an ScM and PhD from Brown University. He is a licensed professional engineer in the State of Connecticut. He is a Senior Member of the IEEE, a member of the American Physical Society, American Society of Engineering Education, Society of Sigma Xi, and Eta Kappa Nu. He holds an amateur radio license, WA3EEC, since 1965 and is the trustee of the University of Hartford Amateur Radio Club, WA1OBY.